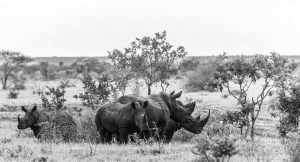 I just stumbled over this photo, which i took on this day in 2009 in Kruger National Park, the second year that saw an increased number of rhino poaching incidents in the Park.

The number of poached Rhinos that year was 50….

Today ,on January 26 2017, exactly 8 years after this photo was taken,statisticaly, we are at 58 dead already,

I don´t see an end coming to this, there is to much greed, too much money to be made from a “product” that is worthless.
Worthless to everyone but the creature that was brutally slaughtered to get it…

Every single Rhino you see in this Photo is probably dead already.

You want to do something about it? Help! Get involved.

Here is a list of Wildlife Conservation & Anti-Poaching Groups:
http://www.poachingfacts.com/conservation-groups/

They need funds. You can help. You can easily donate from basically any country, from South Africa, Kenya, Germany, France, the UK, the United States, Vietnam and China, just name a few.

This entry was posted in Allgemein.